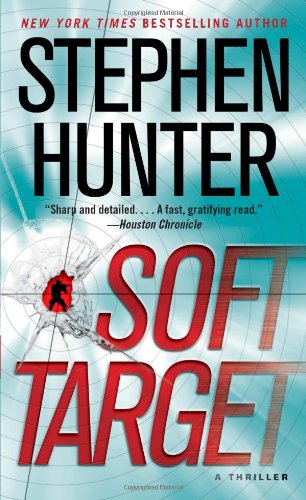 Black Friday America’s largest shopping mall Suburban Minneapolis 3:00 P.M. Ten thousand people jam the aisles, the corridors, the elevators, and the escalators of America, the Mall–a giant Rubik’s Cube of a structure with its own amusement park located in the spacious center atrium. Of those people, nine thousand nine hundred and eighty-eight have come to shop. The other twelve have come to kill.

Stephen Hunter’s hyper-drive, eighth-gear new thriller, “Soft Target, “chronicles the day when the unthinkable happens: twelve gunmen open fire in the mall corridors, driving the pack before them. Those on the upper floors take cover or get out any way they can; but within a few minutes the gunmen have herded more than a thousand hostages into the amusement park.

Ray Cruz, one of the heroes of Hunter’s last bestseller, “Dead Zero,” is in the mall with his fiancee and her family. The retired Marine sniper thought he was done with stalking and killing–but among the trapped thousands, he’s the only one with a plan and the guts to confront the self-proclaimed “Brigade Mumbai.” Now all he needs is a gun.

FBI Sniper Dave McElroy has a gun. But positioned on the roof of the vast building, looking down through one of its thickly paned Great Lakes-shaped skylights, and without explosives or fuses–or the go-ahead from his superiors–he is effectively cut off from his targets and forced into the role of witness to the horror unfolding below.

Set during the four hours of the terrifying event, the story follows both hostages and gunmen, detailing the complex strategic police response, the full-press media saturation coverage, even the politics of SWAT as both the Minnesota State Police and the FBI struggle to control, confront, and ultimately defuse the crisis.

Having learned the lessons of Columbine, the feds believe that immediate action is the only solution. But Douglas Obobo, the charismatic and ambitious commandant of the state police, orders cooperation, tolerance, communication, and empathy for the gunmen. He feels that with his superior negotiating skills, he can make contact with the shooters and gently nudge them into surrender. But what if their goal all along has been unparalleled massacre–and they’re only waiting for prime time?