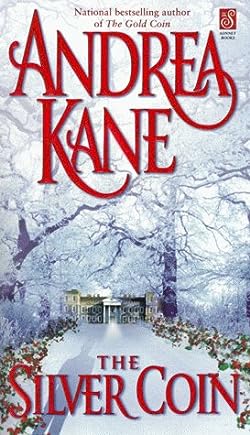 Book 2 in the Coin series
published 1999

Ms. Kane writes like no other, says Romantic Times of Andrea Kane’s breath-catching, dramatic mixture of romance and danger. Now, in this dazzling sequel to The Gold Coin, she continues her suspenseful tale of two beautiful cousins, so alike even their own family mistakes them, so enmeshed in a web of deceit that their very lives are at risk…

All her life, Breanna Colby has lived on the precipice of fear, her only joy the recent reunion with her beloved cousin Anastasia. With her violent father now locked away in jail, the repressed young woman can emerge from her cocoon and pursue all the joys she’s been denied. But she finds — to her terror — that not all the shadows have lifted, and an evil from the past stalks both her and Anastasia.

When authorities are unable to help with this assassin lurking in the darkness, the Colbys turn to the brilliant, unconventional Royce Chadwick, England’s foremost expert on finding people who don’t want to be found. Hard, detached Royce has always been a loner who operates by his own set of rules. He has little patience for weakness.

Delicate Breanna Colby is an eye-opener to him, for beneath her fragile exterior ties a core of steel. As the two face overwhelming danger side by side, Royce discovers a woman he never dreamed existed — one who, despite his cynicism, he is losing his heart to. But their future together can never be — not unless Royce kills the assassin before the assassin kills them.