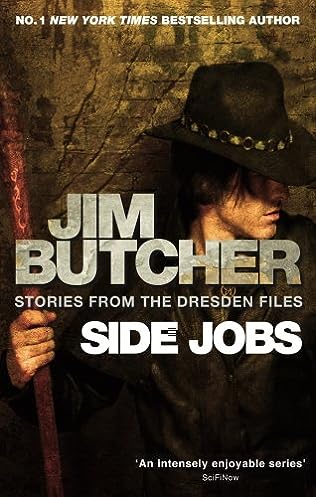 Here, together for the first time, are the shorter from Jim Butcher’s DRESDEN FILES series — a compendium of cases that Harry and his cadre of allies managed to close in record time. The tales range from the deadly serious to the absurdly hilarious. Also included is a new, never-before-published novella that takes place after the cliff-hanger ending of the new April 2010 hardcover, Changes.

It contains:
Restoration of Faith
Vignette
Something Borrowed — from My Big Fat Supernatural Wedding
It’s My Birthday Too — from Many Bloody Returns
Heorot — from My Big Fat Supernatural Honeymoon
Day Off — from Blood Lite
Backup — novelette from Thomas’ point of view, originally published by Subterranean Press
The Warrior — novelette from Mean Streets
Last Call — from Strange Brew
Love Hurts — from Songs of Love and Death
Aftermath — all-new novella from Murphy’s point of view, set forty-five minutes after the end of Changes