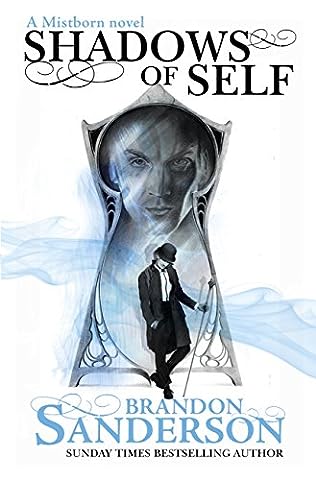 Shadows of Self shows Mistborn’s society evolving as technology and magic mix, the economy grows, democracy contends with corruption, and religion becomes a growing cultural force, with four faiths competing for converts.

It is more than 300 years after the events of the The Final Empire shaped Scadrial. Waxillium Ladrian has returned to the capital city of Elendel from the far flung roughs. Elendel is crisscrossed by canals and railways and towers reach for the sky but this is still a city of dangers and of magic; Allomancy and Feruchemy can still change the world. Wax faces many more adventures.

This bustling, optimistic, but still shaky society now faces its first instance of terrorism, crimes intended to stir up labor strife and religious conflict. Wax and Wayne, assisted by the lovely, brilliant Marasi, must unravel the conspiracy before civil strife stops Scadrial’s progress in its tracks.

Shadows of Self gives fans of The Alloy of Law everything they’ve been hoping for and, this being a Brandon Sanderson book, more, much more.