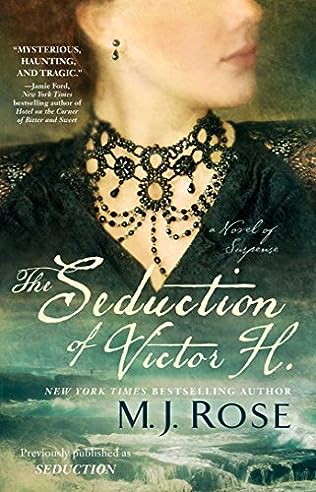 Book 5 in the Reincarnationist series (2013)

From the author of The Book of Lost Fragrances comes a haunting novel about a grieving woman who discovers the lost journal of novelist Victor Hugo, awakening a mystery that spans centuries. A gothic tale about Victor Hugo’s long-buried secrets and the power of a love that never dies…

In 1843, novelist Victor Hugo’s beloved nineteen-year-old daughter drowned. Ten years later, Hugo began participating in hundreds of séances to reestablish contact with her. In the process, he claimed to have communed with the likes of Plato, Galileo, Shakespeare, Dante, Jesus—and even the Devil himself. Hugo’s transcriptions of these conversations have all been published. Or so it was believed.

Recovering from her own losses, mythologist Jac L’Etoile arrives on the Isle of Jersey—where Hugo conducted the séances—hoping to uncover a secret about the island’s Celtic roots. But the man who’s invited her there, a troubled soul named Theo Gaspard, has hopes she’ll help him discover something quite different—Hugo’s lost conversations with someone called the Shadow of the Sepulcher.

What follows is an intricately plotted and atmospheric tale of suspense with a spellbinding ghost story at its heart.