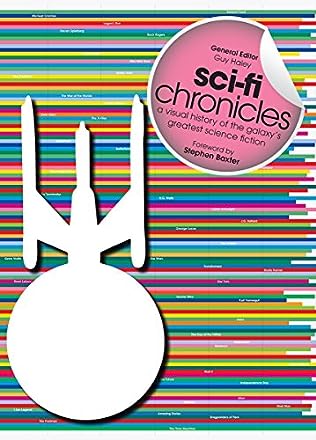 The definitive encyclopedia for the science fiction fanatic.

From Barbarella to Blade Runner, from Solaris to Star Wars, and from 1984 to 2001, Sci-Fi Chronicles seeks out 200 of the greatest galactic creations. Presented in an arresting blend of incisive text, infographic timelines, and stunning photographs, each chronologically arranged entry features an entertaining overview written by a science fiction expert, plus:

The lifespan of sci-fi creations, for example, from book to movie to television series Other key media, such as comics, graphic novels, video games, manga, where appropriate Film and television stills, book and comic covers, and other archive material. Larger franchises — such as Doctor Who and The War of the Worlds — feature lavish spreads of photographs illustrating how they have evolved from black-and-white beginnings to big-budget blockbusters. Seminal sagas like Star Wars and Star Trek enjoy not only a “real world” timeline of films and TV broadcasts but also a fascinating spread detailing their role in the series’ fictional universe.

The book is divided into five distinct sections:

Early Science Fiction: The Birth of a Genre, 1818-1940 including Frankenstein, Journey to the Center of the Earth, A Connecticut Yankee, The Time Machine, The Lost World, Tarzan

The Era of the Atom: The Marvels and Perils of Science, 1950- 1970 including Dan Dare, Quatermass, The Fly, The Twilight Zone, Solaris, The Jetsons, Barbarella, Dune, Soylent Green, Logan’s Run, Land of the Giants, The Iron Man, A Boy and His Dog

Dark Futures: Apocalypse and the War in Space, 1970-1990 including The Stepford Wives, Moebius, Star Wars, Judge Dredd, Mork and Mindy, V, Neuromancer, Back to the Future, Red Dwarf

The Adventure Continues: Modern Science Fiction, 1990-Present including Jurassic Park, Men in Black, Doom, Babylon 5, Stargate, The Matrix, Halo, Jericho, The Hunger Games, Fringe, Wall-E, Avatar. Sci-Fi Chronicles is a truly international guide, with entries focusing on everything from Hollywood blockbusters to Russian cult classics, and from European literature to Australian franchises. It is perfect for dipping into, while its memory-jogging mentions and illustrations make it impossible to put down. It will delight long-standing sci-fi aficionados, yet with a scope that extends from vintage volumes to amazing anime, Sci-Fi Chronicles will also enthrall a younger generation.