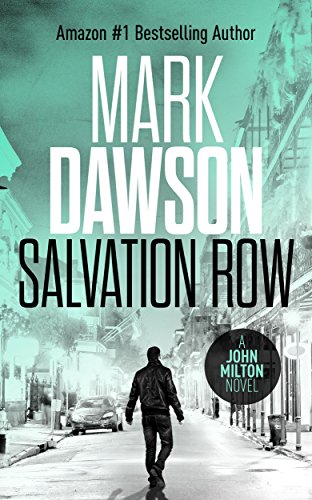 John Milton is trying to make amends for a career spent killing for the British Secret Service. He has a burning need to right wrongs – and rewrite his own bloody past.

He finds himself in Louisiana – the Big Sleazy, the bayou, and the post-Katrina wreckage of the Gulf Coast – with a debt of honor to repay. Isadora Bartholomew, who saved his partner’s life, needs his help. Joel Babineaux, a ruthless property magnate, is out to sink the charity she established to help rebuild the Lower Ninth Ward.

Just when Milton thinks he has neutralised Babineaux’s scheming, a dangerous man from his past takes an unhealthy interest in his present. Claude Boon used to work for the Mossad and might be more than Milton can handle. And then the stakes get even higher…

‘Salvation Row’ is the most explosive thriller yet in Mark Dawson’s bestselling John Milton series. It’s a book no self-respecting suspense fan will want to be without.