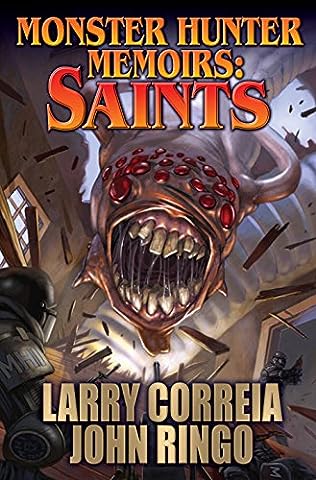 by John Ringo and Larry Correia

This is New Orleans. That mantra had rung in Chad Gadenier’s ears since his first day working in the Big Easy. Everything was different in New Orleans. The food. The climate. The monsters. Even the shadowy and reprehensible MCB was different. But that’s just the beginning.

The real reason New Orleans is so different is a larval Great Old One growing day by day in power and just about ready to pop. If Chad can’t convince “the powers that be” to get involved not only New Orleans but the entire world is going to fall under the power of the nastiest of nasties.

Now on the outs with the US Government and in exile from his usual job of saving the world, Chad must rally the forces of light against the coming darkness. The problem is one guy with a sword and a sub-gun isn’t going to solve this one.

Fortunately, Chad’s made a few friends over the years. And the Fey hate Old Ones as much as God’s people, and they’re not about to give up this world without a fight.

If the Saints don’t come marching in on this one . . . there won’t be a Final Battle. There will be a final massacre.