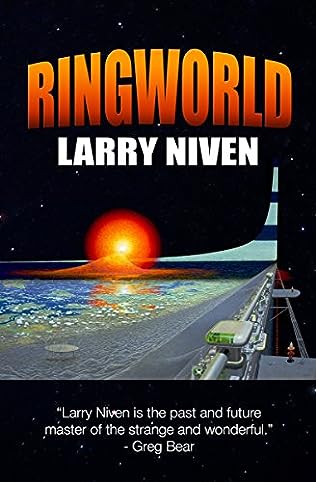 Pierson’s puppeteers, three-leg two-head aliens find immense structure in unexplored part of the universe. Frightened of meeting the builders, they send a team of two humans, a puppeteer and a kzin, eight-foot red-fur catlike alien. Ringworld is 180 million miles across, sun at center. But the expedition crashes, and crew face disastrously long trek.

Louis Wu, accompanied by a young woman with genes for luck, and a captured kzin – a warlike species resembling 8-foot-tall cats — are taken on a space ship run by a brilliant 2-headed alien called Nessus. Their destination is the Ringworld, an artificially constructed ring with high walls that hold 3 million times the area of Earth. Its origins are shrouded in mystery.

The adventures of Louis and his companions on the Ringworld are unforgettable.