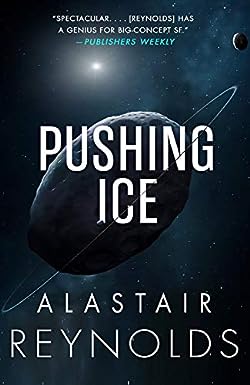 2057. Bella Lind and the crew of her nuclearpowered ship, the Rockhopper, push ice. They mine comets. But when Janus, one of Saturn’s ice moons, inexplicably leaves its natural orbit and heads out of the solar system at high speed, Bella is ordered to shadow it for the few vital days before it falls forever out of reach.

Bella Lind and the crew of her nuclear-powered ship mine comets, and they are good at it. But nothing can prepare them for the surprises in store when one of Saturn’s ice moons inexplicably leaves its natural orbit and heads out of the solar system at high speed. Editorial Reviews The Barnes & Noble Review It’s obvious that Welsh science fiction writer Alastair Reynolds — a former astrophysicist with the European Space Agency — likes to think big.

Pushing Ice is a mind-blowing epic across time and space in which the crew of a mining ship is given a seemingly impossible task — to catch up with a massive alien artifact speeding out of the solar system and somehow unlock its secrets before they’re forced to return home. When Bella Lind, captain of the Rockhopper, receives news that one of Saturn’s moons has inexplicably broken free from its orbit and has begun to leave the system, her ship is the only vessel close enough to investigate the anomaly before the satellite disappears forever. After Lind reluctantly agrees to head the dangerous mission, she and her crew race to catch up with the hurtling moon, only to witness it shed its layers of dirt and ice to reveal a huge alien relic underneath.

But as the artifact picks up speed and heads toward a destination 260 light-years from home, the Rockhopper is caught in its slipstream, and with no choice left but to follow, the crew of the mining ship must somehow find a way to survive the journey.