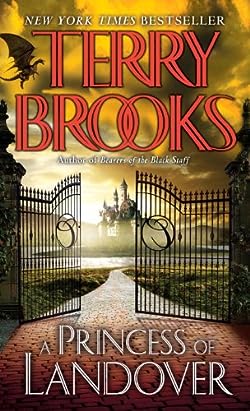 A Princess of Landover

In the final installment of the Magic Kingdom of Landover series, Ben Holiday, High Lord of the magic kingdom of Landover, and his wife Willow have sent their 15-year-old daughter Mistaya to our world to attend a prestigious girls’ boarding school. Mistaya–Misty to her friends–is not pleased with the arrangement. She is forbidden to use her magic for any reason, can’t understand why other girls her own age don’t revere the natural world, and is too clever for her own good in coming up with activities definitely not contained in the private school charter. It’s only a matter of time before the authorities have to act–and Misty is suspended until she can prove she’ll follow the rules.

Misty is happy to be sent home to her beloved Landover because all she wants is to continue her studies with the wizard Questor Thews and Abernathy, the court scribe. But Ben Holiday is furious that his daughter has been kicked out of school. To show her the importance of dedication to a task, he sends her to Libiris, the kingdom’s long-abandoned royal library. Misty runs away rather than take on the assignment, but eventually ends up at Libiris nonetheless, there to uncover a magical plot that could spell the end of all Landover.