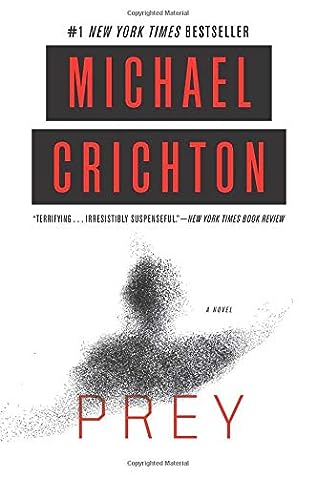 Michael Crichton’s Prey is a terrifying page-turner that masterfully combines a heart–pounding thriller with cutting-edge technology.

Deep in the Nevada desert, the Xymos Corporation has built a state-of-the-art fabrication plant, surrounded by miles and miles of nothing but cactus and coyotes. Eight people are trapped. A self-replicating swarm of predatory molecules is rapidly evolving outside the plant. Massed together, the molecules form an intelligent organism that is anything but benign.

More powerful by the hour, it has targeted the eight scientists as prey. They must stop the swarm before it is too late… an experiment has gone horribly wrong. A cloud of nanoparticles — micro-robots — has escaped from the laboratory. This cloud is self-sustaining and self-reproducing. It is intelligent and learns from experience. For all practical purposes, it is alive.

It has been programmed as a predator. It is evolving swiftly, becoming more deadly with each passing hour.

Every attempt to destroy it has failed.

And we are the prey.

A major problem is needed to be solved and Jack is the only person with the knowledge to do it. Oddly rehired by his old company, MediaTronics, and sent to a secret site across the state border as a consultant for his wife’s firm, Xymos, with a hush-hush Pentagon contract. A surprisingly development for the computer programmer…