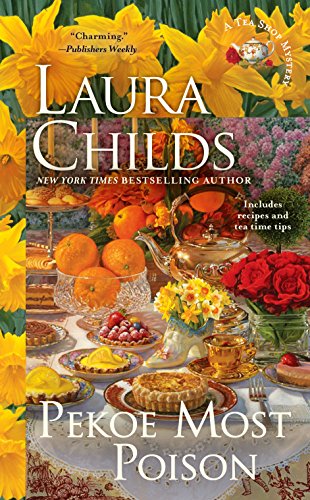 When Indigo Tea Shop owner Theodosia Browning is invited by Doreen Briggs, one of Charleston’s most prominent hostesses, to a “Rat Tea,” she is understandably intrigued.  As servers dressed in rodent costumes and wearing white gloves offer elegant finger sandwiches and fine teas, Theo learns these parties date back to early twentieth-century Charleston, where the cream of society would sponsor so-called rat teas to promote city rodent control and better public health.

But this party goes from odd to chaotic when a fire starts at one of the tables and Doreen’s entrepreneur husband suddenly goes into convulsions and drops dead. Has his favorite orange pekoe tea been poisoned? Theo smells a rat.

The distraught Doreen soon engages Theo to pursue a discreet inquiry into who might have murdered her husband. As Theo and her tea sommelier review the guest list for suspects, they soon find themselves drawn into a dangerous game of cat and mouse…