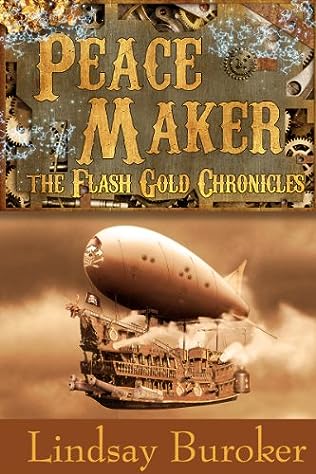 Peacemaker is the third book in Lindsay Buroker’s Flash Gold Chronicles.  Half-breed tinkerer Kali McAlister doesn’t care that the gold rush has stormed into Dawson and prospectors are flooding the north—all she wants is to finish construction of her airship, so she can escape the Yukon and see the world.

Kali’s ability to use flash gold – and the fact that she has some of it in her possession – puts her constant danger from people who want to steal it for themselves.

Unfortunately, the world keeps chucking wrenches into her machinery: a mysterious gambler is pumping her for information on her bounty-hunting business partner Cedar; the notorious gangster Cudgel Conrad is after Kali’s knowledge of flash gold; and a series of gruesome murders is plaguing Dawson. Someone—or something—is ruthlessly slaying tribal women, and, if Kali and Cedar can’t find the killer, she might be the next target.

Peacemaker is a 40,000-word steampunk novella.