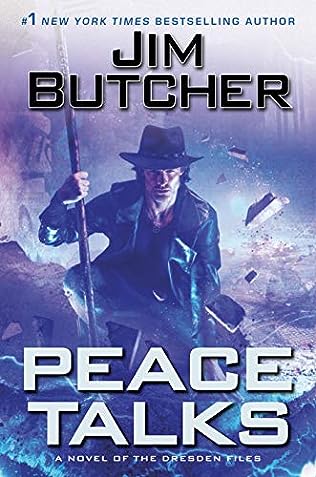 Harry Dresden is back and ready for action, in the new entry in the #1 New York Times bestselling Dresden Files series. When the Supernatural nations of the world meet up to negotiate an end to ongoing hostilities, Harry Dresden, Chicago’s only professional wizard, joins the White Council’s security team to make sure the talks stay civil. But can he succeed, when dark political manipulations threaten the very existence of Chicago–and all he holds dear?

Peace Talks is the sixteenth novel in the Dresden Files series and follows Harry’s adventures after the events of Skin Game.

The various supernatural powers are gathering together in Chicago to kind of hash things out in the wake of the Red Court’s destruction and all the chaos in the world. So basically they will all sit around a campfire and tell stories and sing kumbayah and everything will be fine.

Harry is slightly quieter than before, and his friends have new jobs in the supernatural world. The Supernatural nations meet up in Chicago to form peaceful alliances and Harry has been put it charge of Security. Something bad is clearly going to happen. At the same time, Harry’s vampire brother does something hideous and gets caught, now its basically death row for him. Can Harry save his brother, his city and the supernatural nations?