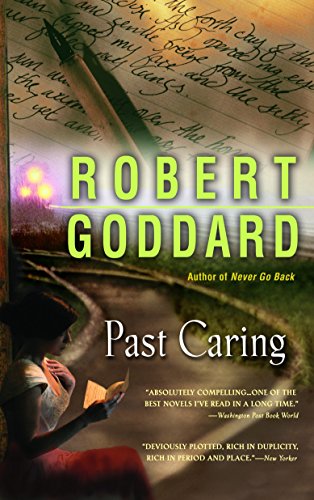 Why should distinguished Edwardian Cabinet minister Edwin Strafford resign at the height of his parliamentary career? Why does the woman he loves so suddenly and coldly reject him? Why, sixty-seven years later, should people go to such lengths – even as far as murder – to prevent the truth from being revealed?

At a lush villa on the sun-soaked island of Madeira, Martin Radford is given a second chance. His life ruined by scandal, Martin holds in his hands the leather-bound journal of another ruined man, former British cabinet minister Edwin Strafford. What’s more, Martin is being offered a job—to return to England and investigate the rise and fall of Strafford, an ambitious young politician whose downfall, in 1910, is as mysterious as the strange deaths that still haunt his family.

Martin is intrigued by Strafford’ s story, by the man’s overwhelming love for a beautiful suffragette, by her inexplicable rejection of him and their love affair’s political repercussions. But as he retraces Strafford’s ruination, Martin realizes that Strafford did not fall by chance; he was pushed. Suddenly Martin, who has not cared for many people in his life, cares desperately—about a man’s mysterious death and a family’s terrible secret, about a love beyond reckoning and betrayal beyond imagining. Most of all Martin cares because the story he is uncovering is not yet over—and among the men and women still caught in its web, Martin himself may be the most vulnerable of all…