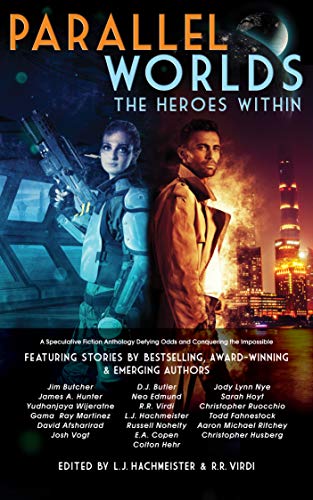 Anthology of short stories including one from The Dresden Files (2019)

Heroes and villains are not always on the opposite ends of the spectrum of good and evil. Sometimes, all that separates them is a fine line. The stories within “Parallel Worlds” explore the lives of such heroes and what drives them – and what keeps them from crossing over to the other side.

This is a very diverse range of stories with a unifying theme: Heroes are not always the guy with the cape flying across the sky. Jim Butcher’s Dresden Files is also represented by a short story titled Monsters.

John Marcone, who first appeared in Storm Front, hires Goodman Grey, whom we initially met in Skin Game, to do a cleaning job. A competitor of Marcone has opened a brothel where children are also working, which makes Marcone extremely mad. He knows he’s not one of the good guys, but he does live by a rule: do not harm children. And his enemy just did.

Grey and his side-kick Viti are off to do the job, which means to get rid of the brothel’s security guards and save the children in the building. For this job, they also ask Harry Dresden for help with the children. As usual, the job is a success.