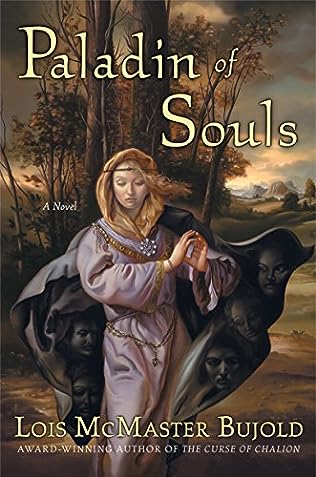 In a land threatened by treacherous war and beset by demons, royal dowager Ista, released from the curse of madness and manipulated by an untrustworthy god, is plunged into a desperate struggle to preserve the endangered souls of a realm.

Three years have passed since the widowed Dowager Royina Ista found release from the curse of madness that kept her imprisoned in her family’s castle of Valenda. Her newfound freedom is costly, bittersweet with memories, regrets, and guilty secrets — for she knows the truth of what brought her land to the brink of destruction. And now the road — escape — beckons. . . . A simple pilgrimage, perhaps. Quite fitting for the Dowager Royina of all Chalion.

Yet something else is free, too — something beyond deadly. To the north lies the vital border fortress of Porifors. Memories linger there as well, of wars and invasions and the mighty Golden General of Jokona. And someone, something, watches from across that border — humans, demons, gods.

Ista thinks her little party of pilgrims wanders at will. But whose? When Ista’s retinue is unexpectedly set upon not long into its travels, a mysterious ally appears — a warrior nobleman who fights like a berserker. The temporary safety of her enigmatic champion’s castle cannot ease Ista’s mounting dread, however, when she finds his dark secrets are entangled with hers in a net of the gods’ own weaving.

In her dreams the threads are already drawing her to unforeseen chances, fateful meetings, fearsome choices. What the inscrutable gods commanded of her in the past brought her land to the brink of devastation. Now, once again, they have chosen Ista as their instrument. And again, for good or for ill, she must comply.