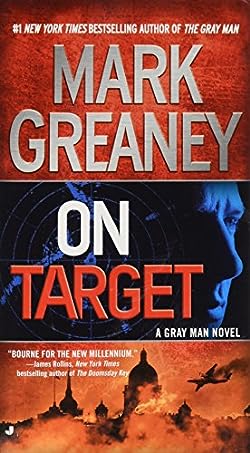 Killing is Court Gentry’s business. Now, his business is about to get personal in the second Gray Man novel from #1 New York Times bestselling author Mark Greaney.

Court Gentry, aka the Gray Man, is back – and once again on the run from old friends and foes. The Gray Man is damaged in so many ways it’s hard to tell how he can make another day. He’s just lucky and good enough to do so.

Four years ago, Gentry was betrayed by his handlers in the CIA. Now, an old comrade, Russian arms merchant Sidorenko, returns to force him on a mission against his will: kill Sudan’s President Abboud, the supposed trigger for the Darfur genocide. But the CIA has its own plans for Abboud. With his ruthless employers on one side, his blackmailing former friends on the other, and a doomed mission ahead, Gentry would kill just to get out of this one alive.

The action is pretty non-stop, the “bad guys” are fairly well-rounded characters, and the setting/political climate rings true.

Every bit as thrilling, informed, and addictive as The Gray Man, and once again skillfully narrated by Jay Snyder, On Target is sure to hit the mark for thriller fans.