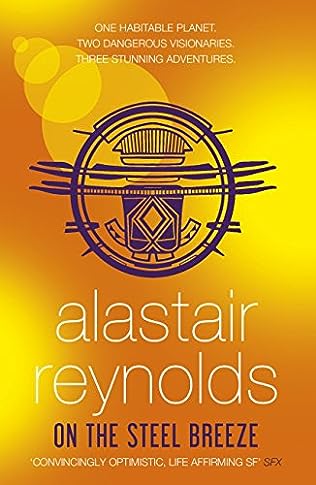 It is a thousand years in the future. Mankind is making its way out into the universe on massive generation ships.

On the Steel Breeze is the follow-up to Blue Remembered Earth. It is both a sequel and a standalone novel, which just happens to be set in the same universe and revolves around members of the Akinya family.

The central character, Chiku, is totally new, although she is closely related to characters in the first book. The action involves a 220-year expedition to an extrasolar planet aboard a caravan of huge iceteroid ‘holoships’, the tension between human and artificial intelligence… and, of course, elephants. Lots of elephants.

Chiku Akinya, great granddaughter of the legendary space explorer Eunice and heir to the family empire, is just one among millions on a long one way journey towards a planet they hope to call their new home. For Chiku, the journey is a personal one, undertaken to ensure that the Akinya family achieves its destiny among the stars.

The passengers travel in huge self-contained artificial worlds—holoships—putting their faith in a physics they barely understand. Chiku’s ship is called Zanzibar—and over time, she will discover it contains an awesome secret—one which will lead her to question almost every certainty about her voyage, and its ultimate destiny…