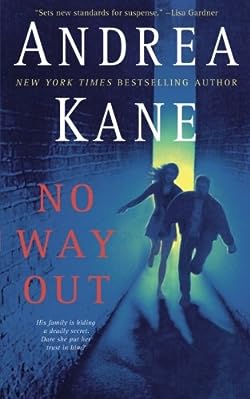 Worried about her favorite second-grade student, the mayor’s son Brian, teacher Julia Talbot attempts to uncover the truth, despite the interference of the child’s powerful uncle, venture capitalist Connor Stratford, a man desperate to hide the high-profile political family’s secrets.

New York Times bestselling author Andrea Kane creates a sizzling mix of emotions, white heat, and pulse-pounding suspense in one of the biggest knockout thrillers of the season. With a child’s life at stake, a woman’s deepest fears and desires careen toward an explosive climax where there is no time to hesitate, no going back, and
NO WAY OUT

Something is wrong with teacher Julia Talbot’s favorite second-grader, the mayor’s son Brian. Seeing the outgoing little boy become increasingly anxious and withdrawn, she suspects problems at home, inside the mansion of a high-profile political family. But even Julia doesn’t know the real truth. Venture capitalist Connor Stratford, the boy’s powerful uncle, does.

Intrigued by Julia, Connor plans a campaign of seduction designed to keep her from snooping — and to get her into his bed. Yet Julia has already learned too much. As danger bears down on her like a runaway freight train, Brian vanishes, and a desperate hunt to find him draws Julia deeper into a family’s secrets and an irresistible passion — and closer to a place where a child’s future, and her own fate, hang in the balance.