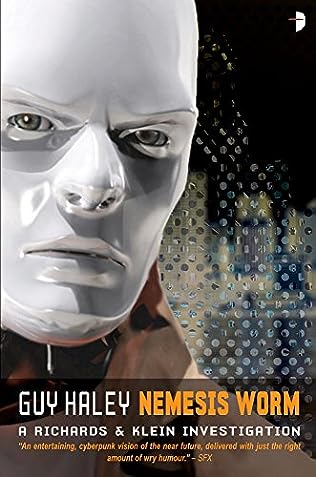 A standalone novella featuring the 22nd century’s greatest detectives, The Nemesis Worm sees Richards & Klein involved in another high stakes investigation. Corpses are showing up all over Old London, and the finger of suspicion points right at Richards himself. Forced to clear his name, Richards and Otto uncover a fanatical group whose actions threaten the relationship between human and AI with destruction.

The future applications of present gadgets and software that Haley posits are both believable and surprising. The author fleshes out a pair of heroes that embrace an entertaining collection of stereotypes while standing out in small ways as new creations, and he places this duo team on a fine cloak-and-dagger plot that is the perfect size for a novella.

AI brings with it difficult issues that we will have to confront in the future, such as our role in the universe, the possibility of a copy of our minds surviving after our death (or living concurrently with us!), and of course, the nature of “human rights”. In The Nemesis Worm, Haley touches on these even as he spins a compelling thriller about a mad group of terrorists bent on constructing the perfect AI.