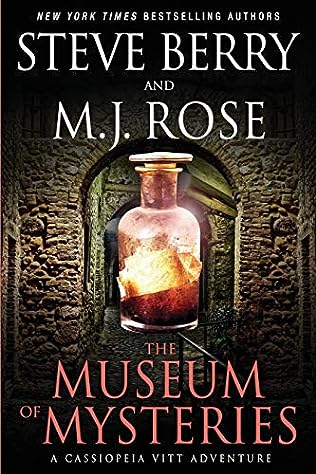 by M.J. Rose and Steve Berry

Cassiopeia has traveled to the village of Eze to visit her dear family friend, Nicodeme, as she usually does when she isn’t traveling. She wasn’t expecting someone coming in and stealing an ancient artifact, giving chase, and then being pulled into an entirely different time period.

In the French mountain village of Eze, Cassiopeia visits an old friend who owns and operates the fabled Museum of Mysteries, a secretive place of the odd and arcane. When a robbery occurs at the museum, Cassiopeia gives chase to the thief and is plunged into a firestorm.

Through a mix of modern day intrigue and ancient alchemy, Cassiopeia is propelled back and forth through time, the inexplicable journeys leading her into a hotly contested French presidential election. Both candidates harbor secrets they would prefer to keep quiet, but an ancient potion could make that impossible. With intrigue that begins in southern France and ends in a chase across the streets of Paris, this magical, fast-paced, hold-your-breath thriller is all you’ve come to expect from M.J. Rose and Steve Berry.