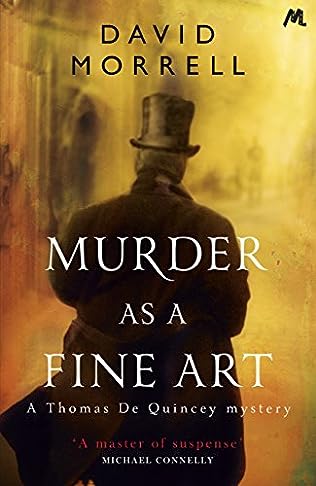 Gaslit London is brought to its knees in David Morrell’s brilliant historical thriller.

Thomas De Quincey, infamous for his memoir ‘Confessions of an English Opium-Eater’, is the major suspect in a series of ferocious mass murders identical to ones that terrorized London forty-three years earlier.

The blueprint for the killings seems to be De Quincey’s essay “On Murder Considered as One of the Fine Arts.” Desperate to clear his name but crippled by opium addiction, De Quincey is aided by his devoted daughter Emily and a pair of determined Scotland Yard detectives.

In ‘Murder as a Fine Art’, David Morrell plucks De Quincey, Victorian London, and the Ratcliffe Highway murders from history. Fogbound streets become a battleground between a literary star and a brilliant murderer, whose lives are linked by secrets long buried but never forgotten.

1854, London: A cruel ritual murderer terrorizes the whole city. Detective Shawn Ryan suspects the opium-addicted writer Thomas de Quincey. With his essay “The Murder considered a fine art”, this had recently caused a scandal and strengthened its reputation as enfant terrible. When Ryan’s suspicion turns out to be the wrong track, the two join together to form a congenial investigator couple. Soon, their investigations lead into the highest political circles and into the shadowy world of opium smuggling.