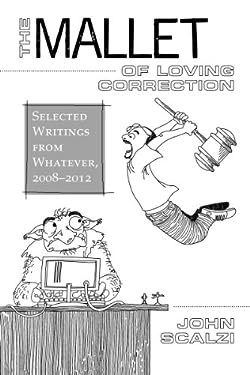 What sort of idiot spends fifteen years writing a blog? New York Times Bestselling author John Scalzi is that sort of idiot. And in those fifteen years the blog he’s written, called Whatever, has won awards, had its entries republished in newspapers, magazines and books, and has seen millions of readers each year come by to read Scalzi’s observations on life, the world, and just about everything that happens in both. It’s one of the most popular personal blogs on the planet.

The Mallet of Loving Correction (named for Scalzi’s method of moderating the comment sections of his site) is the second collection of entries from Whatever. It spans two elections, a civil rights revolution, the fall of MySpace and the rise of Twitter and Facebook, and a whole era on the Internet and on the planet Earth.

Nothing is sacred (“Taunting the Tauntable” is the motto of Whatever): Scalzi takes on politicians, bigots, vengeful nerds and major corporations with righteous sarcasm—and also takes time to muse on love, marriage, children and faith. Everything and anything is up for discussion, examination and explanation.

The Mallet of Loving Correction, in short, is the whole range of one human’s experience, in one easy-to-carry package.