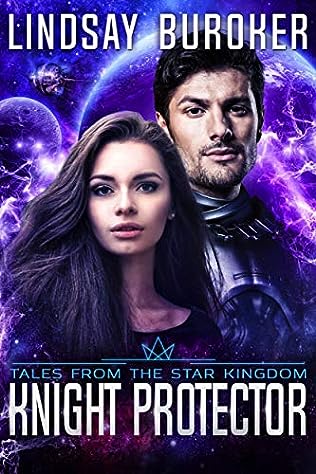 As one of the sultan’s fourteen daughters, and a successful businesswoman who puts money in the family’s coffers, Princess Nalini thought she would escape an arranged marriage.

Her father insists that an alliance with the savage and ambitious Star Kingdom is the only way to avoid a war at home, and for some reason, Prince Jorg—a man she’s never met—wants to marry her.

As if that weren’t bad enough, her father believes the betrothal may make her a target and is assigning her a bodyguard, the victor of one of his odious gladiator matches. She doesn’t want some brutish stranger intruding on her privacy.

But her new protector—Tristan—is not the brute she expected. He has a quick wit, a sexy smile, and even sexier things under the smile.

Unfortunately, Nalini can’t let herself fall in love with Tristan, not when she’s soon to be betrothed to another man. As her father’s daughter, it’s her duty to help her people by cementing this alliance. No matter how much she wishes otherwise…

As Tristan grew up on the streets, his father a convict and his mother a drug addict, all he ever wanted was to become one of the Star Kingdom’s elite knights, something that very few commoners ever achieve. After Tristan labors for years as a squire, the king is ready to appoint him a knight… if he accomplishes one simple task. He must infiltrate the sultan’s palace, gain the trust of Princess Nalini, and make sure she doesn’t run away from her marriage with Prince Jorg.

Nalini isn’t the spoiled rich brat he expected—she spends her days working as hard as he does—and he soon develops feelings for her. With her betrothal looming, and the career he’s worked his whole life for at stake, Tristan can’t let himself act on those feelings.

But can he stand back while a man who doesn’t deserve her claims her for his wife?