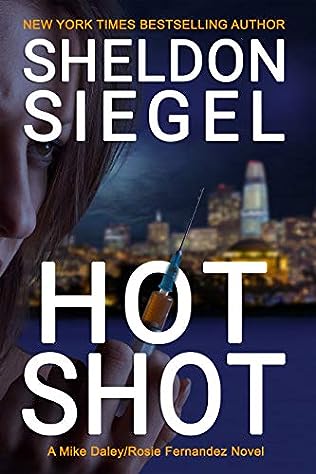 It starts with a phone call on Christmas Eve. Jeff King, the founder of Silicon Valley’s hottest tech startup, was found dead in his mansion above Mission Dolores on San Francisco’s “Billionaires Row.” Lexy Low, a young woman he had met on a “sugar daddy” site, allegedly injected King with a lethal “hot shot” of heroin.

Or did she? Was it an accident? Or murder? In the tenth installment of New York Times bestselling author Sheldon Siegel’s iconic San Francisco series, it’s up to ex-spouses and Public Defenders Mike Daley and Rosie Fernandez to find the truth.

King’s company, Y5K Technologies, is on the cusp of a widely anticipated IPO. In the media, King was portrayed as a visionary and a dedicated husband and father. In reality, Y5K had paid millions in to settle multiple sexual harassment claims. He was also a regular heroin user and frequent visitor to a popular strip club in San Francisco’s trendy South of Market neighborhood.

Lexy is a former wunderkind programmer for one of Silicon Valley’s most successful tech companies. She loses her job when she rebuffs the advances of her supervisor. Her life spirals downward after she becomes addicted to anti-depressants, pain-killers, and, ultimately, heroin. Unemployed and homeless, she supports her habit by hooking up with King using the nom de plume “Sexy Lexy.”

On a rainy night, King invites his senior management team, venture capitalists, and several young women to a party at his house. He also invites Lexy for an after-party. After the other guests leave, King and Lexy rendezvous in King’s bedroom, where Lexy injects King with high-powered heroin. Lexy claims that King provided the heroin. King’s people claim that Lexy brought it. The members of management—who detested King—used the bathroom where Lexy allegedly found the heroin. Did King leave it there? Did somebody from management? Or did Lexy bring it herself?

As Lexy’s case hurtles toward trial, Mike and Rosie race from the mansions of Billionaires Row to the venture capital firms on Sand Hill Road to the high-tech office parks in Palo Alto to find the elusive truth in Silicon Valley’s boys’ club where everybody has something to hide.