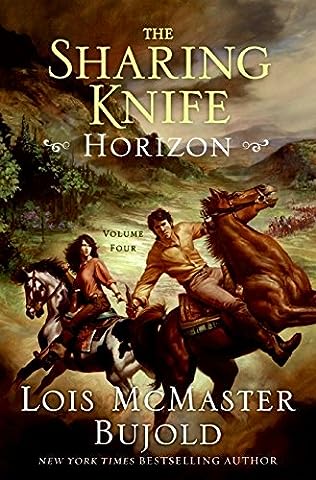 Horizon is the fourth book in the Sharing Knife series, in which a farmer girl and a one-armed Lakewalker man meet while fighting a terrible monster and end up marrying.

Fawn’s husband Dag apprentices to a master groundsetter. But the camp has rigid mores with respect to farmers like Fawn’s people.

As Dag and Fawn deal with both malices and malicious humans, they see clearly what no one else has realized: that the rift between farmers and Lakewalkers inadvertently benefits the malices. The seemingly mismatched couple sets out to change prejudices and find solutions, ultimately a greater challenge than slaying a malice.

The pair must answer the question posed when they killed their first malice together: When old traditions fail, can their untried new ways win?