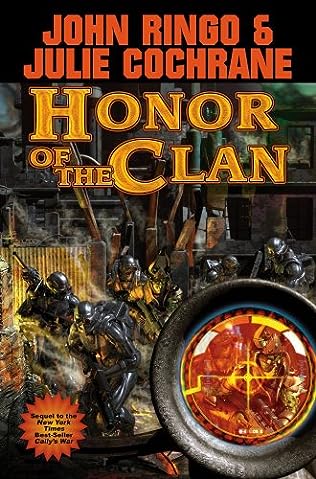 by John Ringo and Julie Cochrane

Three words that resound in the heart of the warrior, but what is duty when country is gone? Where does honour lie when allies are revealed as enemies, when friends are not who they seem and when enemies are the ones we love?

The Indowy “Bane Sidhe” conspiracy has grown strong, and the cunning and resourceful Darhel—tacit rulers of the Galactic Federation—have decided that the time has come to wipe that threat from the stars forever. What the Darhel don’t know is that humans have joined the rebellion—led by thief and assassin extraordinaire, Cally O’Neal.

Now Cally is set to destroy a web of alien deceit millennia in the making. Only one obstacle lies in her path: the renowned warrior who stood tall and saved Earth from utter destruction during its first invasion by alien hordes—a legend who also happens to be Cally’s father!