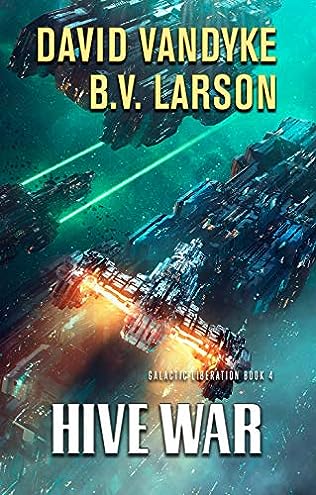 Book 4 in the Galactic Liberation series (2018)

The Invasion of humanity is beginning, the Opters with their new allied force of the Crystals. But it is not going as planned for Straker as he leads the first assault.

The Republic, the Opters and a strange Crystalline race of unknown origin all meet in a series of titanic battles. Commodore Straker summons thousands of ships, but he soon learns he’s technologically out-classed by the enemy.

With traditional victory impossible, the race is on for each side to destroy the key worlds of the other. Billions die, entire planets are destroyed.

Even while the war rages, dark suspicions grow. There are traitors in the midst of the chaos. Straker realizes the worst enemy is the one you believed to be your ally…

HIVE WAR is a thrilling tale of warfare and adventure among the stars. This is the fourth book in the Galactic Liberation series. Look for book #1, STARSHIP LIBERATOR if you’re new to this expanding universe.