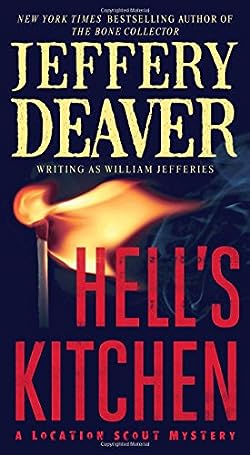 The New York Times bestselling author of The Empty Chair and The Devil’s Teardrop, is back displaying his “ticking-bomb suspense” (People) in this never-before-published thriller. The third thriller in the Location Scout trilogy takes John Pelham to New York City.

John Pellam is making a documentary on Hell’s Kitchen. He and an old lady he is interviewing are also trapped in a fire set by a serial arsonist. When the woman is arrested for the crime Pellam tries to help her and becomes a target of the arsonist as more landmark status buildings are set ablaze

Every New York City neighborhood has a story, but what John Pellam uncovers in Hell’s Kitchen has a darkness all its own. The Hollywood location scout and former stuntman is in the Big Apple hoping to capture the unvarnished memories of longtime Kitchen residents such as Ettie Washington in a no-budget documentary film. But when a suspicious fire ravages the elderly woman’s crumbling tenement, Pellam realizes that someone might want the past to stay buried.

As more buildings and lives go up in flames, Pellam takes to the streets, seeking the twisted pyromaniac who sells services to the highest bidder. But Pellam is unaware that the fires are merely flickering preludes to the arsonist’s ultimate masterpiece, a conflagration of nearly unimaginable proportion, with Hell’s Kitchen — and John Pellam — at its blackened and searing epicenter.