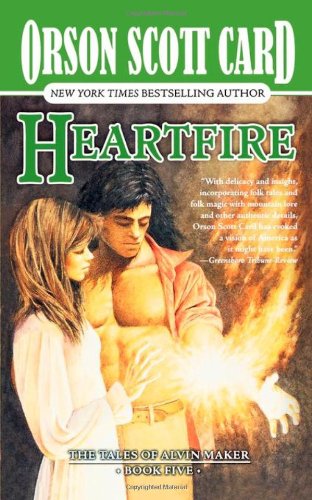 This is the fifth novel in Orson Scott Card’s popular Alvin the Maker series, based on an alternate America where some people are born with knacks, which resemble magical abilities.

The protagonist of the series, Alvin, is a maker who not only can fix things (such as restoring a wounded bird to health with his doodlebug) but is also a natural leader. Alvin and his small band of followers are on a quest to build the Crystal City, a place where those who have knacks can live in safety from the people who sometimes burn them as witches.

While Alvin visits the nearly holy province of New England to find out just how cities work, his wife Margaret, traveling under the name Peggy, journeys to the kingdom of Camelot, which was formerly known as Charleston, South Carolina. There she hopes to persuade the exiled King Arthur to help her abolish the practice of slavery. Heartfire is an excellent mid-series novel that’s sure to delight fans of Alvin.

Peggy is a Torch, able to see the fire burning in each person’s heart. From the moment of Alvin Maker’s birth, when the Unmaker first strove to kill him, she has protected him. Now they are married.

But Alvin’s destiny has taken them on separate journeys. But only one slender path exists that leads through the bloodshed, and it is Peggy’s quest to set the world on that path to peace.