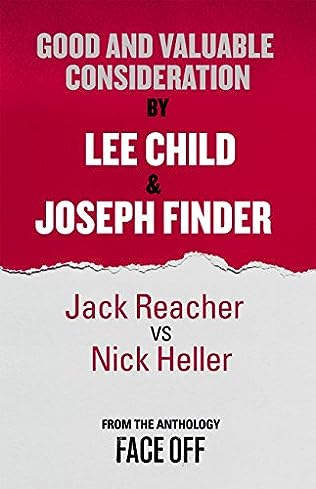 by Lee Child and Joseph Finder

In this short story from the thrilling anthology FaceOff, bestselling authors Lee Child and Joseph Finder—along with their popular series characters Jack Reacher and Nick Heller—team up for the first time ever.

When Jack Reacher sits down to watch a baseball game at a Boston bar, he has no way of knowing what kind of trouble is about to walk in the door—and not just because he’s a Yankees fan in a Red Sox town.

In this action-packed short story, Reacher and a new acquaintance—Sox fan Nick Heller—find themselves drawn into a much less friendly rivalry when the guy sitting between them at the bar turns out to be a marked man.

When Joseph Finder decided to try a series character, he took many cues from Lee Child’s Jack Reacher. Joe named his hero Nick Heller and made him not a private eye, but a private spy. Nick works for politicians and governments and corporations, sometimes digging up secrets they’d rather keep buried. Like Jack Reacher, though, Nick’s sense of justice drives him. He’s a mix of blue collar and white collar, the son of a notorious Wall Street criminal, raised in immense wealth that evaporated when his father went to prison. He spent his formative years in a split-level ranch house in a working-class suburb of Boston.
By nature, Nick’s a chameleon. He can blend in among the corporate elite as easily as he does among the jarheads.

And, of course, he roots for the Boston Red Sox.

Jack Reacher, on the other hand, is a Yankees fan. His background is vastly different from Nick’s, but equally scattered. Reacher is an army brat, raised on military bases around the world: a man without a country, but still an American. He’s a loner who avoids attachments, yet he’s absolutely loyal. He suffers no fools.

Nick Heller and Jack Reacher. Chalk and cheese, as the Brits say. Couldn’t be more different, yet so much the same.

Which can also be said for the two writers.