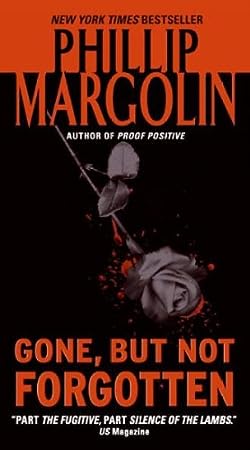 Darkness has fallen on the city of Portland, Oregon. One by one, the wives of affluent and respected men are vanishing from their homes. The only clues to their disappearance are a single black rose and a note that reads “Gone, But Not Forgotten.” It is the rebirth of a horror that has already devastated a community at the opposite end of the country — and, as it did then, terror and death will follow.

Defense attorney Betsy Tannenbaum is trapped in a nightmare as the shadows of a killer darken her world. And she will soon be risking everything she has and everyone she loves to defend a cold, powerful, and manipulating client who may be a victim … or a monster.

The first time Russ went into the bedroom, he missed the rose and the note. His back was to the bed when he stripped off his clothes and hung them in the closet. When fifteen more minutes passed without Vicky, Russ went back into the bedroom to phone her best friend. That was when he saw the note on the pillow on the immaculately made bed. There was a black rose lying across the plain, white paper. Written in a careful hand were the words “Gone, But Not Forgotten.”