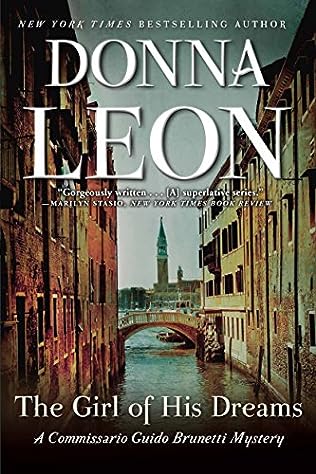 The Girl of His Dreams, the 17th book in Donna Leon’s Commissario Brunetti series begins with Brunetti attending his mother’s funeral, where he’s approached by a priest, one of his brother’s friends, asking him to investigate a new age minister who may be swindling Venetian old parishioners.

One rainy morning Commissario Brunetti and Ispettore Vianello respond to an emergency call reporting a body floating near some steps on the Grand Canal. Reaching down to pull it out, Brunetti’s wrist is caught by the silkiness of golden hair, and he sees a small foot – together he and Vianello lift a dead girl from the water.

But, inconceivably, no one has reported a missing child, nor the theft of the gold jewellery that she carries. Brunetti is drawn into a search not only for the cause of her death but also for her identity, her family, and for the secrets that people will keep in order to protect their children – be they innocent or guilty.

From the canals and palazzi of Venice to a gypsy encampment on the mainland, Brunetti struggles with institutional prejudice and entrenched criminality to try to unravel the fate of the dead child.