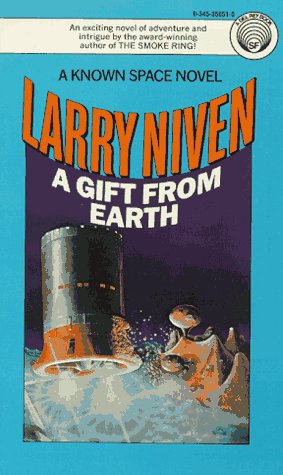 A Gift from Earth

Plateau, a colony in the Tau Ceti system, was settled by humans some 300 years before the plot begins. The colony world itself is a Venusian type planet with a dense, hot, poisonous atmosphere. It would be otherwise uninhabitable, except for a tall monolithic mesa that rises 40 miles up into a breathable layer in the upper atmosphere.

This gives the planet a habitable area about half the size of California. The Captain of the first colony vessel named the feature Mount Lookitthat (from his interjection at first sight of it), and the colony became known as Plateau.

After landing the slower-than-light ships, the Crew sign an agreement, called the Covenant of Planetfall, with their former passengers (who had just emerged from suspended animation and were in a weak bargaining position). This agreement gives the Crew (and their descendants in perpetuity) all control over the new colony.

A system of medical care evolves, in which organ transplantation is the only method of treatment, even for cosmetic defects (such as baldness); a justice system evolves, with all crimes punishable by death, followed by an involuntary donation of the decedent’s transplantable organs (including skin, scalp, and teeth). Not surprisingly, only Colonists are ever arrested for crimes; and only Crew are eligible to receive transplants. Some Colonists become dissatisfied with the system and form a dissident group called the “Sons of Earth.”