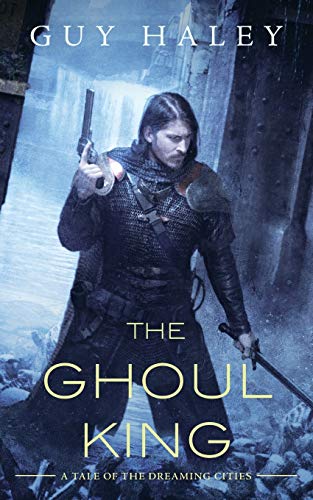 Quinn returns in THE GHOUL KING, another story of the Dreaming Cities by Guy Haley.

The Knight, Quinn, is down on his luck, and he travels to the very edge of the civilized world – whatever that means, any more – to restock his small but essential inventory.

After fighting a series of gladiatorial bouts against the dead, he finds himself in the employ of a woman on a quest to find the secret to repairing her semi-functional robot.

In The Ghoul King, the author actually begins the tale by focusing on the mythical Angels of Pittsburgh, which we heard tidbits about in the first installment but never truly understood. This opening section told from these “divine” beings point of view, giving a reader so many delectable morsels of knowledge about who and what these creatures might be.

After a rather slow beginning spent on introducing the new characters and setting up the reasons for a dangerous mission, The Ghoul King begins to pick up speed quickly. Jaxon and his associates (a group of technophiles led by the charismatic rebel leader Rachel) adding Quinn to their crew, tagging along behind the knight as they head into the shattered remnants of the Dreaming City of Columbus.