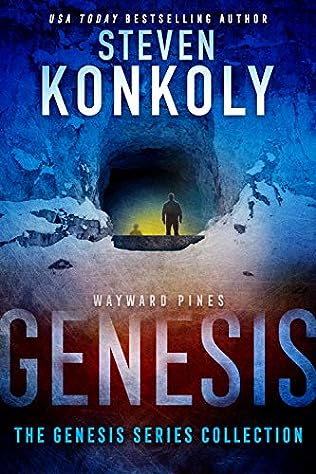 The Genesis Collection features Part I, II and III of The Genesis Series by Steven Konkoly.

David Pilcher predicted mankind’s fall. The world as everyone knew it would be gone when his people emerged to rebuild Wayward Pines–a cozy, idyllic town hidden in the Idaho mountains. Only one obstacle stands in the way. An enemy far deadlier than Pilcher ever imagined possible. A powerful, uncompromising adversary–immune to fear and devoid of mercy. Humankind’s worst nightmare.

With the odds overwhelmingly stacked against the success of project GENESIS, Pilcher takes a wild chance on an unpredictable member of his team. Adam Hassler, former Delta Force officer, is woken early and ordered to explore the valley. The task sounds simple to Hassler, but there’s a catch. He is unaware of the lethal menace waiting in the forest–and nobody plans to warn him.

3813 AD. Reanimated ahead of schedule, Adam Hassler, former Delta Force officer and special agent, leads the first expedition out of David Pilcher’s mountain superstructure. His mission is simple. Guide and protect a team of surveyors and scientists, while they study the landscape and collect data for the reconstruction of Wayward Pines. A few hours into the trek, Hassler suspects that the operation has been compromised–by the very people that ordered it.

Reluctantly accepting the near-suicidal assignment, Hassler embarks on a harrowing solo journey– to liberate Wayward Pines and win the respect of Pilcher’s people.

In the superstructure, conspiracies are hatched and loyalties are tested, as the ever-shifting sands of Pilcher’s mistrust slowly erode the pillars holding up Wayward Pines.

Impatient to start the construction of Wayward Pines, David Pilcher accelerates the timeline to secure mankind’s last known SANCTUARY. But when the heavy-duty machines emerge from the superstructure, the simple task of clearing trees and building a fence turns into a deadly undertaking.

While opposing factions struggle to get the fence project back on schedule, Adam Hassler navigates the “new” world, where a single misstep or lapse of focus can spell the difference between life and death. Hell-bent on revenge, he travels north toward the fence, devising an all or nothing scheme to get back into Wayward Pines.