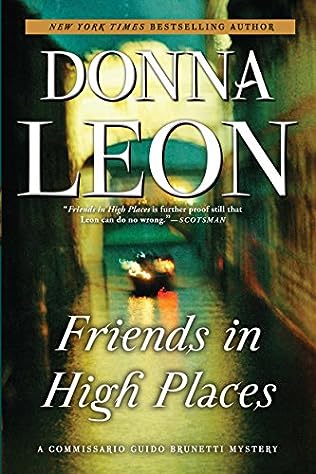 Book 9 in the Commissario Brunetti series (2000)

When Commissario Guido Brunetti is visited by a young bureaucrat investigating the lack of official approval for the building of his apartment years earlier, his first reaction, like any other Venetian, is to think of whom he knows who might bring pressure to bear on the relevant government department. But when the bureaucrat rings Brunetti at work, clearly scared, and is then found dead after a fall from scaffolding, something is obviously going on that has implications greater than the fate of Brunetti’s apartment …

Donna Leon’s sweetly cynical Venetian cop Brunetti has his principles but is always prepared to bend them a little, to appeal to his own Friends in High Places. When bureaucrat Rossi starts to investigate whether his apartment in a historic building has any right to exist, he and his wife start to look for leverage.

When Rossi rings him at his office, seeking help, and is found dead under some scaffolding, Brunetti feels a particular obligation to find out whether he fell, or was thrown. His investigations take him to the heart of corruption, to money lenders and officials and drug dealers and petty thugs, and to solutions and resolutions that are only ever going to be partial.

Brunetti is an attractive detective because he has a human preparedness to make compromises and a judicious sense of when it is morally appropriate, and when it is not. And as always in this excellent and popular series, the true protagonist is the city of Venice, its buildings and its weather and its smells.