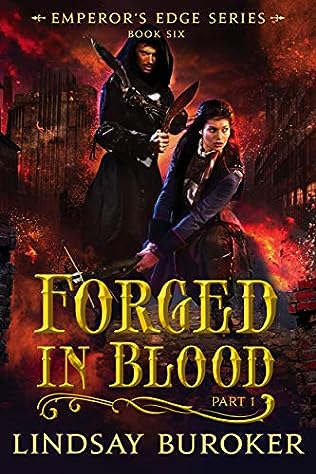 The emperor has been ousted from the throne, his bloodline in question, and war is descending on the capital. Forge, the nefarious business coalition that has been manipulating the political situation from the beginning, has the ultimate weapon at its disposal.

If it was difficult for a small team of outlaws–or, as Amaranthe has decided they should now be called, rebels–to make a difference before, it’s a monumental task now. If she’s to return idealistic young Sespian to the throne, earn the exoneration she’s sought for so long, and help her closest ally win the respect of the son who detests him, she’ll have to employ an unprecedented new scheme…preferably without destroying the city–or herself–in the process.

Sicarius is forced to choose who to protect, and while Amaranthe seeks to sabotage Forge from within, he stays to guard his son. Amaranthe is going through her own PTSD from her time with Pike, and it makes her experiences infiltrating Forge that much more intense.