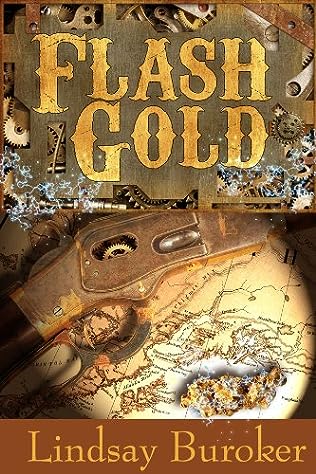 Eighteen-year-old Kali McAlister enters her steam-powered “dogless sled” in a race, intending to win the thousand-dollar prize and escape remote Moose Hollow forever. The problem? Fortune seekers and airship pirates are after her for the secret to flash gold, her late father’s alchemical masterpiece.

With her modified rifle and a pocketful of home-made smoke bombs, Kali wouldn’t normally hide from a confrontation, but taking on a whole airship single-handedly is a daunting task. Unfortunately, the other racers won’t assist her–they’re too busy scheming ways to sabotage her unorthodox sled.

When a sword-slinging stranger shows up, wanting to hire on as her protector, she’s sure he has ulterior motives, but he’s the only one interested in helping her. The question is…why?

Details: an 18,000-word (75 page) steampunk novella set in the Yukon during the gold rush era. A short novella introducing the inventor Kali and the bounty hunter Cedar.