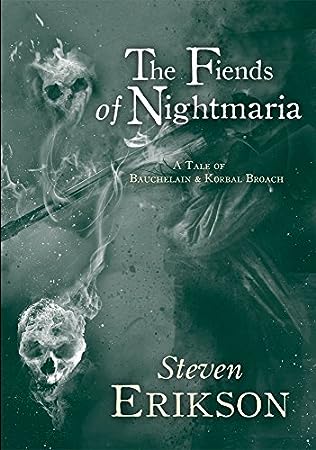 Book 6 in the Bauchelain and Korbal Broach series, (2016)

Containing twenty-plus pieces of artwork from David Gentry, The Fiends of Nightmaria is the new Bauchelain and Korbal Broach novella from Steven Erikson. From a review of the novella: The king is dead, long live King Bauchelain the First, crowned by the newly en-cassocked Grand Bishop Korbal Broach. Both are, of course, ably assisted in the running of the Kingdom of Farrog by their slowly unravelling manservant, Emancipor Reese.

However, tensions are mounting between Farrog and the neighbouring country of Nightmaria, the mysterious home of the Fiends. Their ambassador, Ophal D Neeth Flatroq, seeks an audience with King Bauchelain who has thus far rebuffed his overtures. But, the evil necromancer has some other things on his plate.

In order to quell potential rebellion nearly all the artists, poets, and bard wannabes in the city have been put to death, however a few survivors from the Century’s Greatest Artist competition languish in the dungeons bemoaning their fates. Well, just moaning in general really… and maybe plotting escape and revenge. An added complication is that the Indifferent God is loose somewhere in the bowels of the castle.