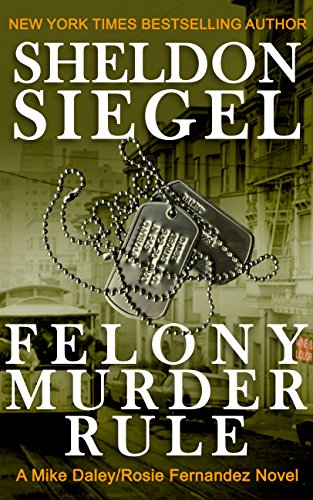 In the eighth installment of New York Times bestselling author Sheldon Siegel’s iconic San Francisco series, Mike and Rosie are now the co-heads of the Felony Division, where they spend more time running the office and supervising younger attorneys than trying cases. That changes quickly when Mike is visited by Melinda Nguyen, whose son, Thomas, a high school senior, is about to go on trial for murder.

Thomas has been arrested under California’s archaic “felony murder rule,” which says you can be can be convicted of first degree murder if you’re present when someone is killed during the course of a felony, even if you don’t pull the trigger. The charge against Thomas shows the absurd limits of this legal doctrine. He was sitting outside in the car first-degreed entered a liquor store in San Francisco’s teeming Tenderloin District and allegedly flashed a gun. The shopkeeper pulled out an AR-15 and calmly filled the alleged robber’s chest with bullets.

Thomas is charged with murder even though he never entered the store. Thomas fires his original lawyer on the eve of trial after she recommends acceptance of a plea bargain. With nowhere else to turn, his mother petitions for help from the Public Defender’s Office, and Mike agrees to handle the trial scheduled to start four days later. As the evidence mounts against Thomas, it tests Mike and Rosie’s legal skills and relationship. Their stress is compounded by the fact that Thomas and his mother may have a connection to Mike’s older brother, Tommy, who died in Vietnam forty years earlier.