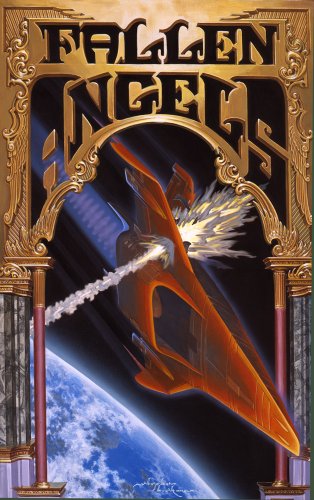 Near future/alternate future in which anti-technology forces control Earth, while a struggling colony survives in orbital space and on the Moon. Science fiction fans on Earth work to save downed astronauts. Contains new (2011) Retrospective Afterwords by Niven, Pournelle, and Flynn.

Having been shot down over the North Dakota glacier, two Space Habs astronauts find themselves paralyzed by the Earth’s gravity and at the center of a ruthless manhunt by the United States government.

It all happened so fast…
One minute the two Space Hab astronauts were scoop-diving the atmosphere, the next they’d been shot down over the North Dakota Glacier and were the object of a massive manhunt by the United States government.

That government, dedicated to saving the environment from the evils of technology, had been voted into power because everybody knew that the Green House Effect had to be controlled, whatever the cost. But who would have thought that the cost of ending pollution would include not only total government control of day-to-day life, but the onset of a new Ice Age?

Stranded in the anti-technological heartland of America, paralyzed by the Earth’s gravity, the “Angels” had no way back to the Space Habs, the last bastions of high technology and intellectual freedom on or over the Earth. But help was on its way, help from the most unlikely sources..