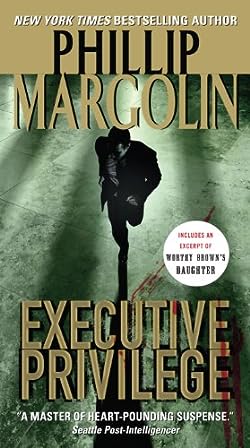 Private detective Dana Cutler receives a seemingly routine assignment to follow a young girl working on a challenger’s campaign against the incumbent U.S. president. To Cutler’s shock, she witnesses a rendezvous between the young woman and the president. The next morning the woman’s mutilated body is discovered, and Cutler is suddenly a suspect. How can she prove her innocence against someone who has the power of the presidency at his disposal?

When private detective Dana Cutler is hired to follow college student Charlotte Walsh, she never imagines the trail will lead to the White House. But the morning after Walsh’s clandestine meeting with Christopher Farrington, President of the United States, the pretty young coed is dead—the latest victim, apparently, of a fiend dubbed “the D.C. Ripper.”

A junior associate in an Oregon law firm, Brad Miller is stunned by the death row revelations of convicted serial killer Clarence Little. Though Little accepts responsibility for a string of gruesome murders, he swears he was framed for one of them: the death of a teenaged babysitter who worked for then-governor Farrington.

Suddenly nowhere in America is safe for a small-time private eye and a fledgling lawyer who possess terrifying evidence that suggests the unthinkable: that someone at the very highest level of government, perhaps the president himself, is a cold and brutal killer.