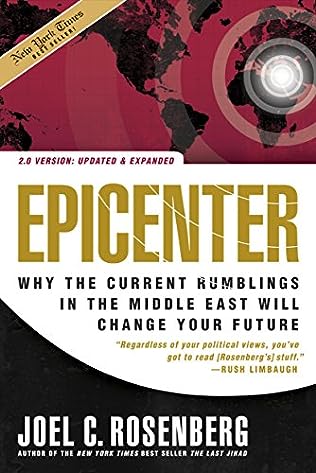 With over one million novels in print, New York Times best-selling author Joel C. Rosenberg has been called “eerily prophetic” and a “modern Nostradamus” for his uncanny ability to write political thrillers that come true. In his first nonfiction book, this evangelical Christian from an Orthodox Jewish heritage takes readers on an unforgettable journey through prophecy and current events into the future of Iraq after Saddam, Russia after Communism, Israel after Arafat, and Christianity after radical Islam.

You won’t want to miss Joel’s exclusive interviews with Israeli, Palestinian, and Russian leaders, and previously classified CIA and White House documents. Similar to the approach Joel takes in his novels, his desire is to draw readers into stories, anecdotes, and predictions in a way that builds confidence that allows Joel to share his faith in Jesus Christ and the reliability of Scripture as a guide to understanding the past and the future.

Drawing on his experience in Washington, his own exclusive interviews with world leaders, and his astute political acumen, Joel makes sense of the events surrounding the Middle East. He connects the information in a way that will make you understand and really care about the world’s most important events and how they impact your life–from gas prices to your bank account.

Change–big changes, dramatic changes, changes that will transform the world as we know it
Answers–what the changes are underway in the world’s most important countries

Insight–readers will understand the trajectory of world events by being taken inside the governments of Iran, Iraq, Russia, China, and more
Accessibility–aimed for a wide audience in both the general and Christian markets
Faith–Joel shares his faith in Jesus Christ and the reliability of Scripture
Epicenter will answer questions like:
Will Iraq go from bad to worse? Will Israel and her Arab neighbors find peace, or is another major Middle East war just around the corner? If the new, post-Soviet Russia is our friend, why is the Kremlin creating a new class of thermonuclear weapons and building an alliance with radical Islam?