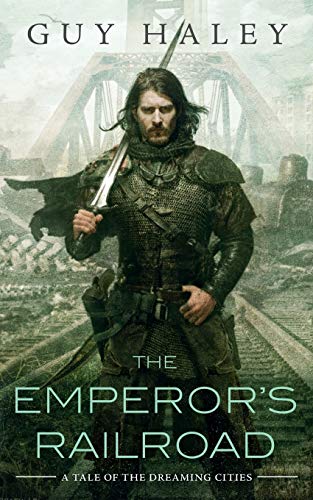 Global war devastated the environment, a zombie-like plague wiped out much of humanity, and civilization as we once understood it came to a standstill. But that was a thousand years ago, and the world is now a very different place.

Conflict between city states is constant, superstition is rife, and machine relics, mutant creatures and resurrected prehistoric beasts trouble the land. Watching over all are the silent Dreaming Cities. Homes of the angels, bastion outposts of heaven on Earth. Or so the church claims. Very few go in, and nobody ever comes out.

The Emperor’s Railroad by Guy Haley is a genre-blending fun novella, mixing zombies, dragons, guns, swords, and knights with a post-apocalyptic, dystopian world. Told from the point of view of a 12-year-old boy, Abney, this tale relays his and his mother’s journey from their zombie destroyed home town to the apparent safety of a cousin’s residence in the town of Winfort. Their path takes them along the Emperor’s railroad to the city of Charleston, Virginia, then on to their destination.

The Emperor’s Railroad is a remarkably unique approach to post-apocalyptic fantasy. Every step of the journey reminds us of what’s been lost, and what remains of our ‘modern’ civilization.