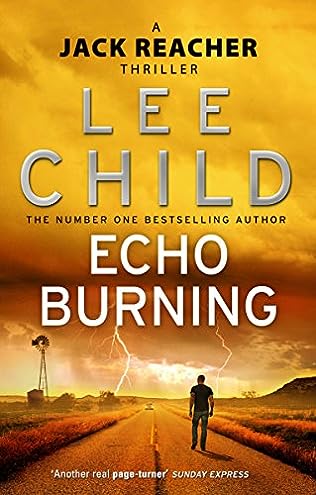 Hitching rides is an unreliable mode of transport. In temperatures of over a hundred degrees, you’re lucky if a driver will open the door of his air-conditioned car long enough to let you slide in. That’s Jack Reacher’s conclusion. He’s adrift in the fearsome heat of a Texas summer, and he needs to keep moving through the wide open vastness, like a shark in the water. The last thing he’s worried about is exactly who picks him up.

He never expected it to be somebody like Carmen. She’s alone, driving a Cadillac. She’s beautiful, young and rich. She has a little girl who is being watched by unseen observers. And a husband who is in jail. Who will beat her senseless when he comes out. If he doesn’t kill her first.

Reacher is no stranger to trouble. And at Carmen’s remote ranch in Echo County there is plenty of it: lies and prejudice, hatred and murder. Reacher can never resist a lady in distress. Her family is hostile. The cops can’t be trusted. The lawyers won’t help. If Reacher can’t set things straight, who can?