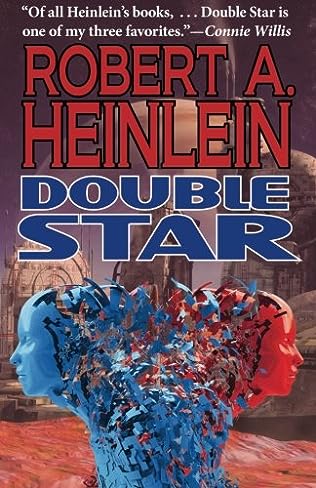 Told in first person, the story centers on a down-&-out actor, Lawrence Smith–aka Lorenzo Smythe, The Great Lorenzo. A brilliant actor & mimic, he’s down to his last coin when a spaceman hires him to double for a public figure.

It is only when he’s on way to Mars that he finds out how deeply he’s been deceived. He’ll have to impersonate one of the most prominent politicians in the solar system with whose views he disagrees: John Joseph Bonforte, leader of the Expansionist coalition, currently in opposition but with a good chance of taking power at the next election.

One minute, down and out actor Lorenzo Smythe was — as usual — in a bar, drinking away his troubles as he watched his career go down the tubes. Then a space pilot bought him a drink, and the next thing Smythe knew, he was shanghaied to Mars.

Suddenly he found himself agreeing to the most difficult role of his career: impersonating an important politician who had been kidnapped. Peace with the Martians was at stake — failure to pull off the act could result in interplanetary war.

And Smythe’s own life was on the line — for if he wasn’t assassinated, there was always the possibility that he might be trapped in his new role forever!