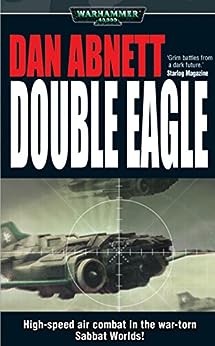 In the blood-soaked Sabbat worlds crusade, Warmaster Macaroth’s Imperial Crusade Force is attempting to halt a massive counterattack led by the Chaos legions of the dread-lord Anakwanar Sek.

While the Space Marines and Imperial Guard rule the battlefields of the Sabbat Worlds, the skies belong to the Imperial Navy. On Enothis, the enemy are threatening to halt the Imperial advance.

Daemonic forces push into Imperial territory, thousands of refugees flee across the deserts and an infamous Chaos-tainted pilot, Khrel Kas Obarkon, rules the sky, his skill in the cockpit matched only by his kill tally. The ace pilots of the Phantine Twentieth Fighter Corps are the Imperium’s only hope for victory.

It takes the famous Sabbat Worlds Crusade to the skies, with fast-paced aeronautical action from Dan “Master of War” Abnett.